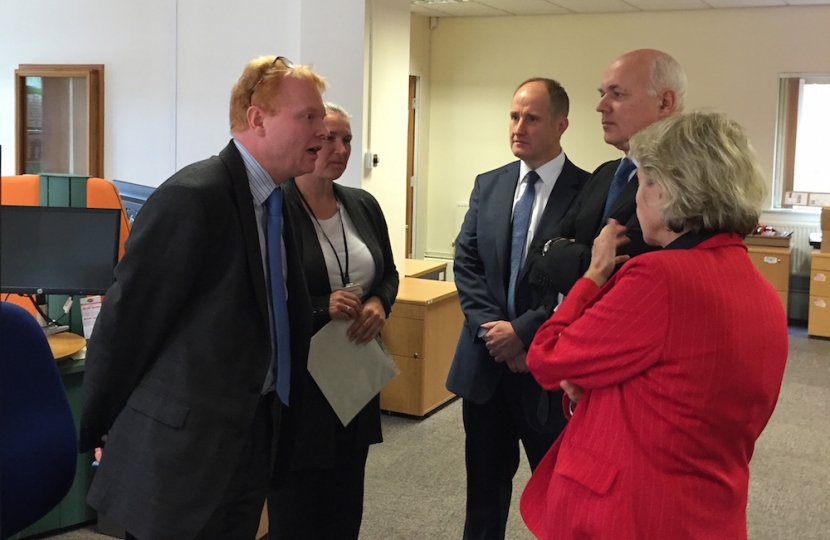 Iain Duncan Smith, Secretary of State for Work and Pensions visited Malton Jobcentre Plus on Thursday with Thirsk & Malton Conservative Parliamentary Candidate, Kevin Hollinrake and Anne McIntosh MP. He welcomed new figures showing that 498 fewer people are claiming Jobseeker’s Allowance in Thirsk & Malton since 2010, a 48% drop. This means more people in work, with the security of a regular pay packet and a brighter future ahead of them.

People are moving off benefits and into work across Yorkshire & The Humber, with 123,000 more people in work compared to the last election.

Across Britain unemployment has fallen by its largest annual amount since records began – falling below two million for the first time since 2008.

The figures also confirmed that next year the basic state pension will rise by 2.5 per cent, faster than inflation and earnings, because of the Conservatives’ triple lock. The £148 rise will help ensure financial security for older people who have worked hard all their lives.

Kevin Hollinrake said: “These figures are great news, confirming not only that fewer people in in Thirsk & Malton are relying on benefits since 2010, but also that the state pension will rise by £148 next year – faster than earnings or inflation. This means a brighter, more secure future for people in who want to work hard and get on, as well as for those who’ve spent their whole lives doing so.

“As these figures show that plan is working, delivering an above inflation rise in the state pension and getting us closer to our target for full employment. This means greater financial security for hardworking taxpayers and their families in North Yorkshire, who can look forward to the future with greater peace of mind.”