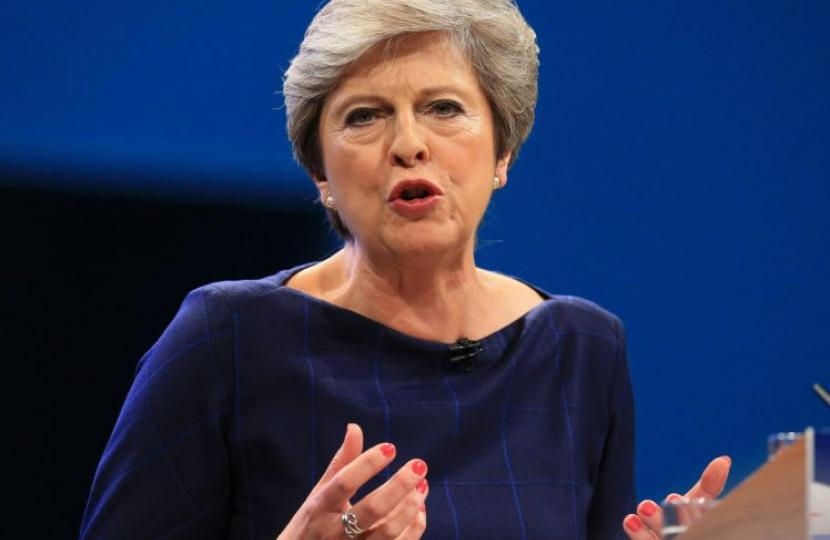 It was never going to be a celebratory Conference. There is no point in hiding the fact that the June general election made the significant challenges ahead that much more difficult. However, for those who look on the bright side of life, there is much to be proud of and grateful for. Employment is at record levels, the deficit is down by two-thirds and income tax has been cut for ten million people. We were the fastest growing economy in the G7 last year and we receive more inward foreign investment than any other country in Europe. Manufacturing orders are at their highest level since 1988 and retail sales are on the increase. We are one of only five permanent members on the United Nations Security Council and a leading member of NATO. There’s more money for the NHS, Education and Defence and new and exciting opportunities post Brexit. I could go on. Our future is also bright and yet, if we listen to the media and the opposition, all we ever hear is doom and gloom.

Last week there were some major policy announcements which will make a huge difference to the lives of millions of people. But I suspect these were not heard by everyone outside Manchester, partly because the Conference was overshadowed by the unspeakable events in Las Vegas, worrying developments in Catalonia and absurd political positioning.

Mrs May announced a major housebuilding programme, the like of which we have not seen since the days of Harold Macmillan, including providing another £10bn for Help to Buy to help first-time buyers onto the ladder and an additional £2bn for affordable homes. There will be a cap on energy prices, saving consumers an average of £100 a year, 100 new free schools every year of this Parliament, with a high proportion in the North, a review of student fees and loans and an independent review of mental health problems. Earlier in the week, the Chancellor had already pledged his commitment to the Northern Powerhouse with £400m transport investment for better roads and railways in the North to connect our great cities – a clear sign that the Government has recognised that the gap between spending in Yorkshire and London must be addressed.

I was in the hall for the Prime Minister’s speech and can report that there was an overwhelming feeling of support and encouragement for Mrs May as she battled with her sore throat and the stupid actions of a third-rate comedian. Personally, I think she did a brilliant job; unflinching and showing great fortitude and resilience in the face of these challenges. For those of us who are required to speak in public, losing your voice is your worst nightmare. The standing ovations she received were entirely genuine and I shared the huge sympathy for the Prime Minister. Despite this, she made an excellent speech, which was effectively a call to arms for us all to unite to create a better Britain supported by some major new policy initiatives. We should not let the media or the opposition divert us from the job in hand; finishing the job of balancing the books and building a successful future outside the European Union.

Of course, hanging over last week’s Conference was the perceived threat of a Labour Government. And yes, we must not allow this to happen, so alien are their policies compared to our Conservative values, built on reward for hard work and opportunity for all. Our lives, our country would be ruined for generations to come if Mr. Corbyn delivered even a proportion of his extra half-trillion pound spending spree. So that’s why we, Conservatives, need to stop squabbling and start fighting back.

It’s time to forget about the Labour leadership who, less than six months ago, were nearly on their way out. Let’s not forget this year’s May elections – yes May, that’s just five months ago – when Labour lost control of seven Councils and 350 seats and the metro Mayor contests in the West Midlands and Tees Valley (a traditional labour heartland) to the Conservatives. The knives were out for them then. And yet now Mr. Corbyn has a become the new Messiah and can do no wrong. Well, I have a message for him; we have five years before the next election, five years to show voters why we are the only party who truly believes in, and can actually deliver, a fairer country for everyone.

So, let’s be positive and unite behind our leader and her team. If you had been watching the Conference on TV before the PM’s speech, you will have seen an impressive line-up of young, newly elected Conservative MPs speaking with passion and eloquence. These young people are our future. What we need is our own momentum, not a rabble-rousing, rent-a-mob Momentum, but a steady, upbeat and confident march towards a better tomorrow.

I do not say this lightly because, so far, Brexit has been tough, perhaps tougher than most of us had ever imagined, but the opportunities are great. Without doubt, the election results were a disappointment, good people lost their seats and our majority disappeared. But we can’t keep on beating ourselves up. We must move on, we must believe in ourselves and we must make sure our message of fairness, personal responsibility, hope and optimism is heard.

We are the captains of our souls. I believe that, with the agreement of Brussels or without it, if we work together we will make a success of life outside the EU, we will reinvigorate our Party, our message and our campaign and we will win a clear majority at the next general election.

As always, it is a great honour to serve the residents of Thirsk and Malton constituency.